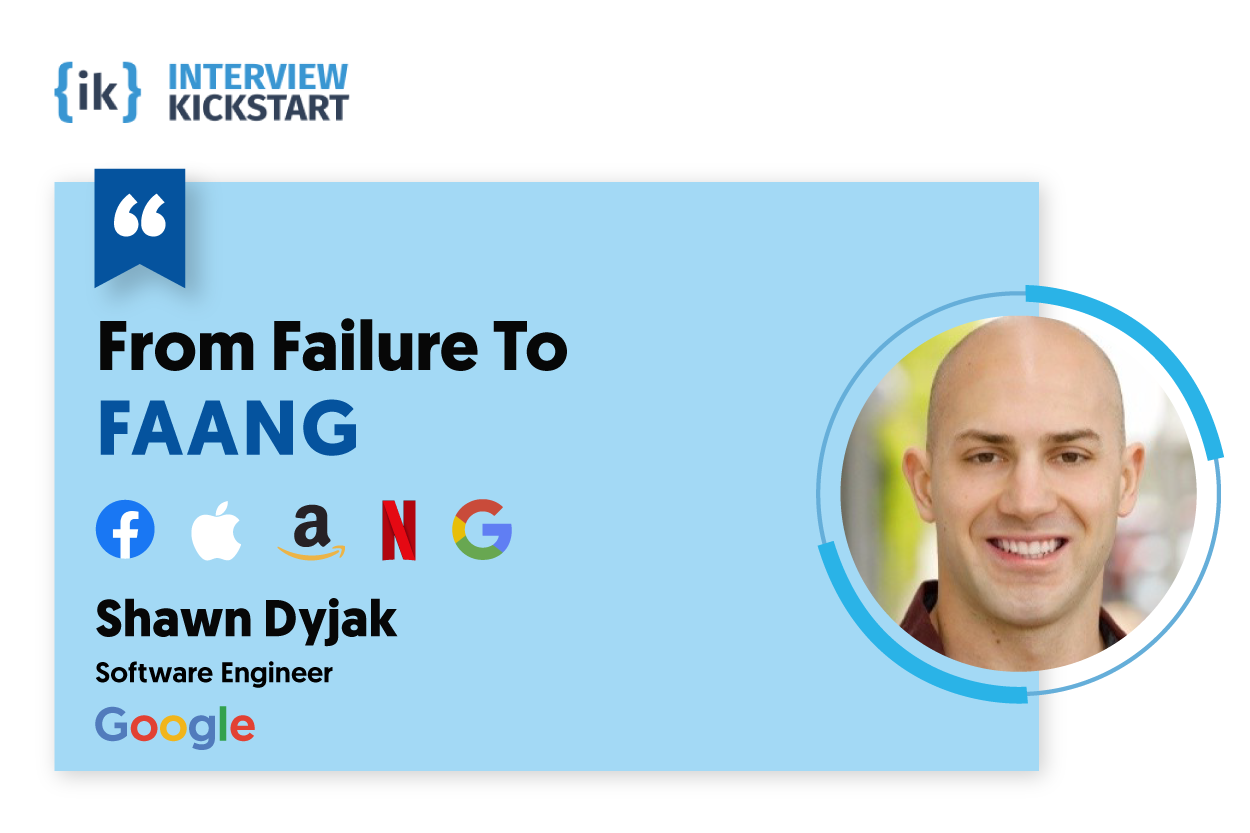 Shawn spent over eight years of his career as a software consultant at start-up companies. He had attempted and failed FAANG interviews in the past. Eventually, to succeed, Shawn realized he needed structured interview prep. So, he joined Interview Kickstart. After preparing with Interview Kickstart, Shawn bagged nine offers and chose Google. Read on to find out how he prepared for technical interviews and landed his dream job.

What triggered the desire to switch jobs? Also, why did you choose IK?

I decided to leave my previous job because there was some technical disagreement. I understood that I would not get what I wanted. So I started preparing for tech interviews on my own. I landed a few on-sites from Amazon, Google, and Microsoft, but never got an offer. That was demotivating. After a month, I thought to myself, "Why am I doing this if I am going to get the same result?" That’s when I reached out to IK, and it worked out quite well for me.

What do you think prevented you from succeeding the first time around?

I was low on confidence. I found myself memorizing solutions, trying to find patterns, and hoping that I knew what was going on. But I didn't.

Before you signed up for the program, which companies did you target that didn't work out?

I targeted Google, Facebook, and Amazon. I interviewed two to three times in each over eight months, but it didn't work out.

How did you set up your interview? Was there a process you followed?

Can you tell us more about how mock interviews helped you?

The great thing about mocks is that they help reduce interview anxiety. Another plus point is that the interviewers are hiring managers at FAANG. They will tell you where you're going wrong and how you can improve. I spent time deconstructing the interviews, discussing strategies, etc., with the interviewers. They walked me through my strengths and weaknesses. I worked on my confidence, thought process, technical abilities, etc. Also, the best part was that IK allowed me to schedule mock interviews whenever I thought I was ready.

How much time did you spend each week while preparing?

What was the toughest part of this entire process?

The first is that interview questions have gotten a lot harder in the past 5 years or more. Also, you almost always feel that you're not ready. I got a total of 9 offers and I felt unprepared for each one of them. I went to Google and I was trembling. So getting over that is definitely the hardest thing. You've got to believe that once you put in the efforts, why wouldn't it work? Trust yourself. That was the biggest hurdle I had to get over. If you practice problems at IK, they are as hard, if not harder, than what you get at Facebook or Google.

How did you stay motivated?

I had an end date in mind. I knew I had to achieve my goal within a limited time frame. Otherwise, I would burn out. That helped me stay motivated.

Interview Kickstart has a pre-defined curriculum structure. Did that benefit you, or did you have to do things outside the frame?

That's part of why I chose IK. For instance, week one was dedicated to sorting, week two to dynamic programming, and so on. I learned each concept in detail and moved on to the next one, which helped me a lot.

How did you negotiate when you got your offer?

IK helps with offer negotiations. They have an entire class on it. I also researched and learned about the pay structures of different companies. I made sure I got several offers and used them to leap from one offer to another. But, I was careful not to overdo it.

What is that one piece of advice you would give to all the folks who are aiming to nail tough tech interviews at FAANG?

Have a timeline; when are you going to start interviewing? That helps you plan where you need to be, how much you need to study, and it gives you motivation for an end date.

That was Shawn’s story on how he went from failure to FAANG. Are you ready to have your own career path sorted? Join a live, technical interview preparation webinar with our founder who will take you through how to nail complex Technical Interviews—the Interview Kickstart way. The webinar is free to attend. Details to join this workshop will be sent by email after you register.