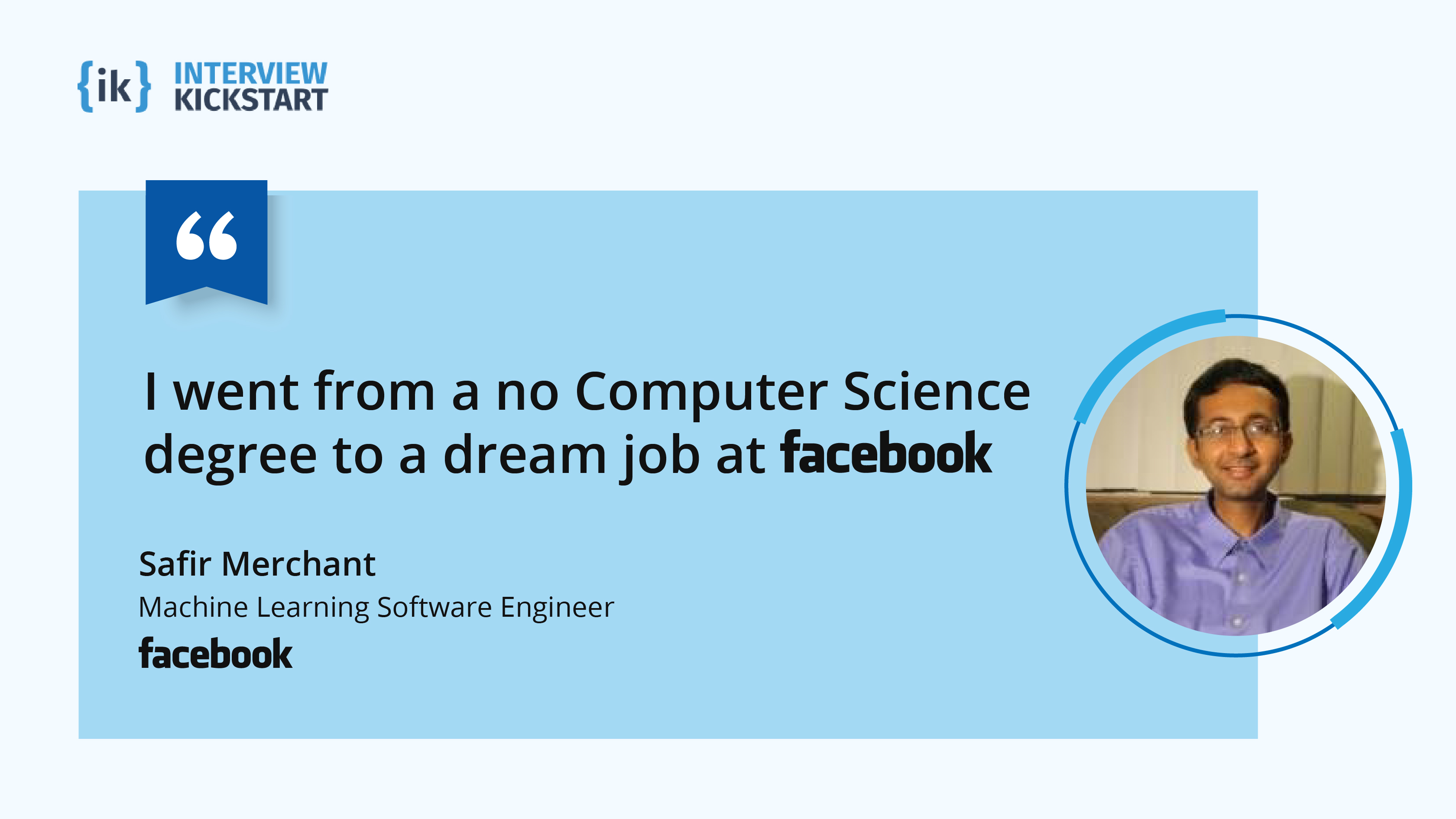 What are the things that you need for a career in tech? The right skills, determination, and the ability to problem-solve and work through challenges.

But we wanted to take a second and focus on one thing that you don’t need to make it in tech: a degree in computer science!

Surprised? Many people outside of the tech industry think you need a CS degree to land a job in tech. You might think you need to uproot your life, spend thousands of dollars, and invest a ton of time to earn a CS degree for a tech career.

But we’re here to tell you once and for all: you do not need a computer science degree to land a job at FAANG.

Still don’t believe us? Let’s see what Safir Merchant, who in spite of not having a CS degree joined Facebook as a Machine Learning Engineer after completing Interview Kickstart's program, has to say.

What triggered your desire to switch jobs? And why did you choose Interview Kickstart?

When I moved to the San Francisco Bay Area in 2017, I met a man who told me I should stay at my former company because I didn’t have a CS degree. He said there weren’t many opportunities for people like me at FAANG. And honestly, I believed him for a little while.

But then, I met a few friends who had a similar background as me, and they were getting interviews at FAANG. That’s when I realized it wasn’t about having a CS degree, so I started preparing for tech interviews on my own.

But there’s so much information available on the internet that you don’t really know what is needed and how much to learn about a  particular subject. I was looking at some technical interview preparation courses and was referred to Interview Kickstart by another alum. I attended Soham Mehta’s session, and that’s what got me into IK.

The three biggest advantages that that IK has when compared to any other course are:

These factors and more helped me choose IK as my prep course.

How much time did it take you for preparing and then getting a job offer?

It took me 8 to 9 months from starting my technical interview preparation to getting a job offer.

How much time did you dedicate to your interview prep?

I studied every day, almost two hours per day and six hours on weekends.

Often, students who want to ace tech interviews lose motivation along the way. How did you stay motivated through this process?

You’ll have your ups and downs. But you have to realize that it’s a marathon. Let’s say you couldn’t dedicate enough time on one particular day for your interview prep. You have to come back the next day to make up for the lost time. Don’t let a small hurdle derail you. Think of the big picture.

Also, the presence of a peer group at IK was like having a buddy. You know you’re accountable because you have to teach your buddies a particular problem, or you’re planning to solve a certain number of problems for them. Having a support system of motivated people helped me stay motivated.

How did you set up your interview? Was there any process you followed?

About five to six months into my prep, and a couple of mock interviews later, I thought that I was ready and opened my LinkedIn profile. A bunch of startups had reached out to me. Plus, recruiters from Facebook and Google had shown interest in my profile.

Unfortunately, I couldn’t do well at the startup interviews, and that scared me. So I took a few more mock interviews. One of the mock interviewers gave me excellent feedback. I was told that I was almost there, and if I’d prepare just one month more, I would pass the phone screens and the main on-sites as well.

So I finished all my mock interviews and then went on to Google and Facebook job interviews.

The mock interview questions played a critical role in telling me where I stood in my interview prep.

What is that one piece of advice that you would give to folks who are preparing to nail tough tech interviews?

Many people think their age or lack of a computer science degree will hold them back.

But I’m here to say it’s not about where you are or what you’ve done in the past. It’s about what you can do going forward. I think that’s the most significant piece of advice I can give anybody. Don’t let anyone tell you that you can’t do this. You can do anything! Just formulate a process to get there.

Hope Safir's story showed you how a CS degree doesn't really matter when it comes to cracking FAANG interviews. It's all about dedication and how well you prepare. To get started, join a live, technical interview preparation webinar with our founder who will take you through how to nail complex technical interviews the Interview Kickstart way! And guess what? It’s absolutely FREE! Details for joining this workshop will be sent by email after you register.